You are here: Home / News / Trump says once he straightens out U.S., he’ll be ‘very happy person’ 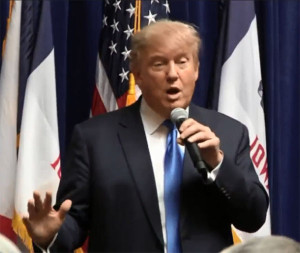 “Before we forget, we have to Caucus. We have to get out,” Trump said at the start. “Otherwise, it doesn’t mean anything.”

“You never know what’s going to happen. You know it’s a lot of people, a lot of live television stuff,” Trump said. “I thought it was really interesting. I thought a couple of the folks did well. I think a couple of them did very poorly, actually.”

Trump said he got “zero sleep” after the debate in order to get to Des Moines for a live interview early this morning on MSNBC. Trump said on the “Morning Joe” show that rival Ted Cruz made a “disgraceful” hit at “New York values” last night. Trump didn’t mention Cruz or any of his competitors by name to the crowd in Urbandale, but a man in the crowd asked Trump about the answer he gave during the debate about being angry.

“I am angry about a lot of things and I won’t be angry for long because once we straighten it out, I’m a very happy person, O.K.?” Trump said and the crowd applauded.

Trump spoke for about 16 minutes, then took questions from the crowd for nearly 20 minutes. The first question came from a man who grew emotional while talking about his son’s death from a heroin overdose.

“That’s a tough deal. What we have to do is we have to make sure that they don’t get hooked because it’s a tough thing and I know what you went through and he’s a great father. I can see it and your son is proud of you,” Trump said, and the crowd applauded. “It’s tough stuff and it could be stopped and the best way, you know, to stop it is upfront, before it happens because once they start taking it, they say it’s brutal.”

Twenty minutes later, as Trump left the stage, he thanked the man for the question.

Trump is due back in Iowa Monday for an event at the John Wayne Library in Winterset and an appearance at a Renewable Fuels meeting in Altoona.

Trump today was greeted by protesters who yelled “Trump makes America hate again” as he did a live early morning T-V interview at a Des Moines coffee shop. Later, a group of protesters outside Trump’s event in Urbandale held signs calling for affordable child care.