You are here: Home / News / Candidates Rubio, Christie, Paul campaign in Iowa over the weekend 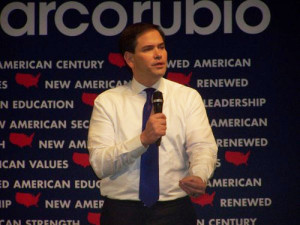 The temperatures outside may be frigid, but the candidates’ rhetoric is getting heated as the Iowa Caucuses draw near.

“I don’t care what anybody says. This is cold by any standard, O.K.?,” Florida Senator Marco Rubio joked with a crowd Saturday morning, earning head nods and laughter.

“You’re not going to be able to undo the damage of a weak president unless you elect a strong one,” Rubio said.

Rubio is touting a 2014 budget provision he championed. It has limited federal funding to cover insurance companies losses on policies sold on the Affordable Care Act’s “marketplace”.

“Everybody running for president as a Republican’s against ObamaCare. I know they are. I believe them, but I’m the only one that’s actually done something about it,” Rubio said. “Not a 23-hour speech, something meaningful about it.”

That’s a swipe at Texas Senator Ted Cruz. Cruz gave a marathon speech in the senate in 2013 to try to derail the health care law. Cruz wasn’t Rubio’s only target, though. Rubio repeated some of the criticism he lobbed at New Jersey Governor Chris Christie in last week’s candidate debate.

“We can’t just elect any Republican,” Rubio said as he closed his speech in Johnston Saturday morning.

Christie offered a similar argument to a crowd in Ames Saturday, suggesting voters should choose someone with executive rather than legislative experience.

“Let’s not make the same mistake again,” Christie said. “First-term United States senators are wonderful people, but they’ve never made a serious decision of consequence and be held accountable for it in their lives.”

Both Rubio and Cruz are first-term senators. Christie told the crowd he wouldn’t “have to read the owner’s manual.”

“I’d urge you to think about who is the person who’s most tested, more ready, most prepared to keep America safe and secure, ’cause if we don’t do that well everybody, then nothing else matters,” Christie said.

Rand Paul of Kentucky — another first-term senator — campaigned in Iowa this weekend, too. He went to an indoor shooting range in Johnston Sunday afternoon and aimed at a target that read: IRS TAX CODE.

“That got the juices running a little bit,” Paul said.

In brief remarks to supporters at the event, Paul took aim at “Democrats and the media” who support restrictions on guns.

A group of surrogates campaigned for Democratic presidential candidate Hillary Clinton in Iowa this past weekend. Among the Clinton crew were former President Bill Clinton and his daughter, Chelsea; former Secretary of State Madeleine Albright and a handful of women who are U.S. Senators. The candidate herself will be back in Iowa tonight.