Branstad says the state has a history of working to bring about equality, and talked about the state motto.

“It says ‘our liberties we prize, our rights we will maintain.’ And you think about that Iowa state motto, it is very similar to the ideals that Doctor Martin Luther King Junior stood for and promoted in fighting for civil rights for all people,” Branstad says. 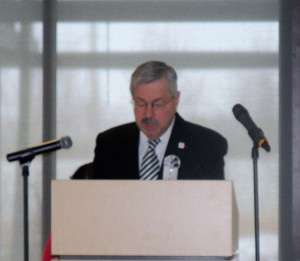 Branstad called for all Iowans to continue to uphold the ideals of King. “On this day, this special day, this national holiday, this state holiday, we honor Doctor Martin Luther King Junior,” Branstad says. “And I ask you to join with me in reaffirming our American and Iowa ideals of freedom, opportunity and justice for all.”

Polk County District Court Judge Odell McGhee gave the keynote address. He says Doctor King has brought us a long, way, but there is still a long way to go, and racial disparity still exists. 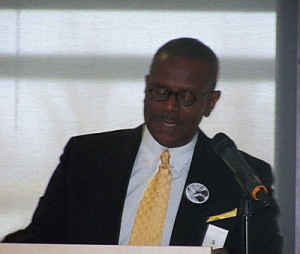 “Police brutality still exists. Black Lives Matter, and I hoping most of you have taken the time to know what that is,” McGhee says. “It is not saying that nobody else’s lives matter. But it is saying that in terms of our relationship with law enforcement — we have to really understand that you just can’t go out and shoot people by the mere fact that they are African-American.”

He says more needs to be done to rehabilitate young people involved in drug crimes. “I mean they have done nothing really to hurt society other than hurting themselves. But nonetheless, 60 percent of the people in jail today are in there because of dope,” McGhee says. “Now some of them deal it too, but I’m just saying a lot of them — in fact most of them — are in there for the mere fact that they use it. And of course, not being very bright, they try to sell a little bit of it too to take care of their use.”

McGhee says those who smoke marijuana are not criminals, but they make up a large portion of the prison population. “We need to consider giving new life to Martin Luther King’s dream. We need to acknowledge that the dream began with love for self and love for mankind,” McGhee says. “For without love for self and mankind, there is no absolute truth for which we can base a call to justice.”