You are here: Home / Agriculture / Iowa delegation sends another letter to EPA on Renewable Fuel Standard 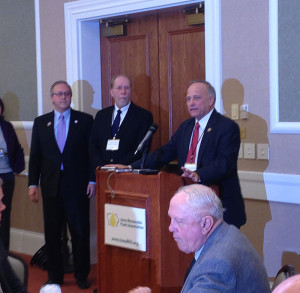 All six members of Iowa’s Congressional delegation have signed a letter they’re sending to the head of the U.S. Environmental Protection Agency, repeating the call to revise the Renewable Fuel Standard or RFS. It regulates the amount of fuels, like ethanol, that are required to be made.

The EPA’s guideline for 2016 ethanol production is below 2007 levels. Iowa is the nation’s top producer of corn-based ethanol and soy-based biodiesel, and Grassley says our production facilities are very capable of stepping up their game.

“Ethanol and biodiesel suppliers can answer the call,” Grassley says. “The EPA should give them this chance. It’s the right move for the environment, for consumer choice and for fuel production.” The EPA has raised the fuel standard from its original suggestion, but the levels are still far too low, according to Grassley. He says the standards were only raised to this point after much haggling.

Grassley says, “The lessons learned with the EPA is to weigh in early and never take for granted that EPA understands the industry and its potential.” Iowa has 43 ethanol refineries in operation that are capable of producing four-billion gallons a year. The state also has 12 biodiesel facilities with the capacity to produce nearly 315 million gallons a year.