You are here: Home / News / Mississippi River Museum has success with Ice Fest 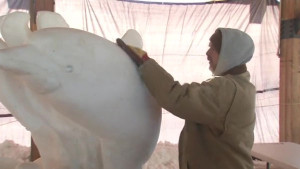 January is typically the slowest month of the year for many Iowa tourist attractions.

That’s the case for the National Mississippi River Museum and Aquarium in Dubuque, but Museum Education Director Mark Wagner says their annual Ice Fest drew a solid crowd over the last three days. He spoke with KCRG-TV as the event wrapped up on Monday.

“Some schools are out and people are out and the attendance, really, for a Monday is pretty dog gone good,” Wagner said. The event featured snow and ice sculptures, sledding and other winter-related activities. Roger Poling of Dubuque spent the day in and outside the museum with his three kids. He doesn’t want his children spending the winter hibernating indoors.

“As a kid we were never allowed inside all day. It was always, ‘go outside and play.’ That’s what I grew up doing and I’d like the kids to have that opportunity outside as well,” Poling told KCRG. The high temperature on Monday in Dubuque was just 3 degrees.