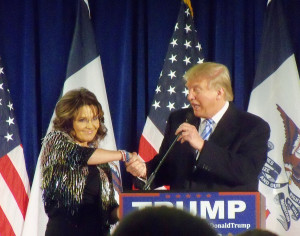 Sarah Palin and Donald Trump shake hands after her endorsement.

Palin used Trump’s signature line in addressing those who braved the snow and stood in line waiting for the event.

“Are you ready to make American great again?,” Palin asked to cheers from the crowd. Palin, a noted conservative, joked with Trump that the heads of the media at the back of the room were “spinning” as they watch both of them on stage. She says she is ready to “Stump for Trump.” 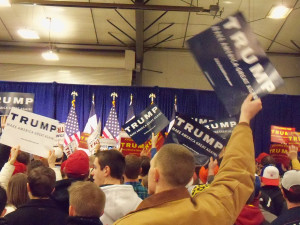 “When asked why I would jump in, into a primary — kind of stirring it up a little bit maybe — and chose one over some friends who are running, who I’ve endorsed in their races before they decided to run for president, I was told, warned left and right: ‘you are going to get so clobbered in the press, chewed up and beat up and spit out.’ And I’m thinking, and?,” Palin says. She had endorsed Ted Cruz in his successful race for a U-S Senate seat in Texas. Cruz is battling Trump for the Republican vote in Iowa.

Palin says Trump is a proven leader from outside Washington, D.C. who can get things done. “I am here because like you, I know it is now or never. I’m in it to win it,” according to Palin. “Because we believe in America and we love our freedom. And if you love your freedom, think of that. Think of that and know that the United States military deserves a Commander and Chief who loves our country passionately and will never apologize for this country.” 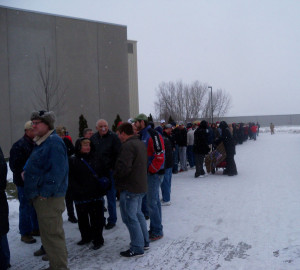 People wait in line to see Donald Trump in Ames.

“We are ready for a change. We are ready and our troops deserve the best, a new Commander and Chief whose track record of success has proven he is the master of the art of the deal, he is one who would know to negotiate,” Palin says.

She says Trump is not from the private sector and knows the main thing a president must do is to keep America safe economically and militarily. “You ready for a Commander in Chief who will let our warriors do their job and go kick ISIS’ ass?,” Palin question the crowd.

Palin says this election is about more than just defeating Democrat Hillary Clinton. She says it is about ending the hold the Washington establishment has on the country where they are only interested in looking out for themselves and getting reelected. Palin says Trump has his own money and won’t owe anything to anyone when he is elected president.

“He’s going to be able to empower you to look out for one another again instead of relying on a bankrupt government to supposedly be looking out for you…I think you are ready for that,” Palin says. “And Iowa, I believe too that you are ready to see that our vets are treated better than illegal immigrants are treated in this country.”

Palin spoke for about 20 minutes, and then Trump stepped back to the microphone. “We’re going to give them hell,” Trump says. Trump then quickly wrapped up the rally with a thank-you to Palin. “This is a woman that from day one I said if I ever do this I have to get her support. She feels it, she understands it better than anyone,” Trump says. “Sarah on behalf of myself, my family, and the country, I want to thank you very much.”

Trump and Palin shook hands and spoke with supporters for several minutes before leaving the building. Palin will campaign for Trump again today in Norwalk.