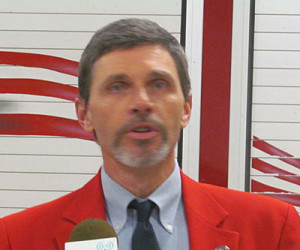 “Recruitment is difficult,” said McNees, “not only for the size of the community I’m from, still getting someone to volunteer their time. It is a big commitment to go get your Firefighter I and Firefighter II (qualifications), and do all the hazmat that goes with it, then not to mention all the EMS they do here, too. So, finding people, and with the population the way it’s trending rural Iowa, it makes it even tougher.”

McNees says one factor hindering recruitment is that most firefighters are volunteers and must juggle responding to fire or medical calls with their regular jobs. “That makes it harder to find people who will want to respond during the day,” said McNees. “And, it really makes it a problem for them — that’s why you see a lot of automatic aid calls, when you see two or three departments handling calls at one time.”

At the same time, McNees says having employees respond to fire calls is tough on employers. “Any employer who allows a person to be on the fire department or rescue squad, is really doing quite a bit for their community, as well, if they’re allowing that to happen, because it is taking somebody off of their production line, or out of their office,” he says. “It could put a hard press on a business.”

So, why become a firefighter? In addition to giving back to their communities, McNees says volunteer firefighters have a chance to impact people’s lives, as you’re dealing with people in their most dire time of need.

“It is so rewarding,” he says. “We do it to help people — that’s why a majority of people are on here. There’s a love of man that we share. You get so fulfilled from that that you don’t mind volunteering to do it. It becomes a way of life and an expectation you have. I have not done anything volunteer-wise that’s been as rewarding over the years as being a firefighter.”

McNees recently attended a ceremony in Essex, in which nine of the department’s firefighters were honored for 25-plus years of service.