You are here: Home / News / ‘This is a time for urgency,’ Rubio tells Iowa crowd 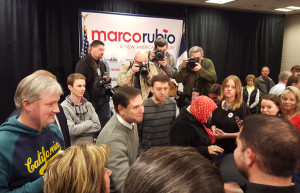 “This is a time for urgency. If we get this election wrong, there may be no turning around for America,” Rubio said. “We can’t afford to get it wrong and we won’t, but that means we have to elect someone who understand the frustrations that you have and I do because I’ve lived some of them.”

Rubio spoke to a crowd of about 150 in Ottumwa. Rubio criticized the regulatory over-reach of Obama Administration agencies like the EPA and he also accused Obama of reducing U.S. influence around the globe.

“When I’m president of the United States, we are not reducing our military. We are rebuilding our military because the world is a safer and a better place when America has the strongest military in the world,” Rubio said, to applause.

Rubio used the word “crazy” to describe the nuclear deal the Obama Administration and other world powers negotiated with Iran.