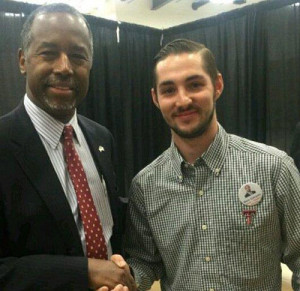 Republican presidential candidate Ben Carson says he hopes the death of one of his enthusiastic campaign volunteers will inspire more kindness in the political world.

Twenty-five-year-old Braden Joplin was one of four Carson campaign workers involved in a roll-over accident on Interstate 80 near Atlantic Tuesday morning. He was gravely injured and was taken to a trauma center in an Omaha hospital, where he died late Tuesday afternoon.

Carson flew to Omaha to be with Joplin’s family. Late Tuesday night he addressed the media briefly. Carson told reporters he hoped Joplin’s death “might help some people think about the hard-heartedness that has infested our land.” Carson said “people are just mean” — the opposite of Joplin, who Carson described as a compassionate and caring college student.

“Life is so fleeting and we have to make the most of every bit of it,” Carson said.

The van Joplin was riding in hit a patch of ice, flipped over, slid into on-coming traffic and was hit by a pick-up carrying three children and two adults. Carson is asking for prayers for Joplin’s family, as well as the people in the pick-up that struck the Carson campaign vehicle.