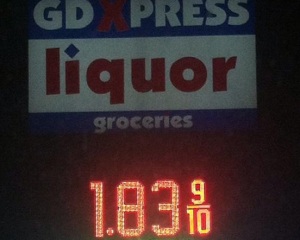 Iowans are seeing gasoline prices continue to slide, now averaging a $1.82 a gallon statewide, the lowest we’ve seen the average in about seven years.

Gail Weinholzer, spokeswoman for AAA-Iowa, says the prices may keep falling for another four to six weeks.

“We’ve seen prices plummeting over the last month or so and we expect them to continue to drop as we head into February and then plateau a bit and actually start heading back up when we start the switchover from the winter to the summer-grade fuels again,” according to Weinholzer. She says consumers are used to the ups and downs.

“We typically see prices increase between 25 and 50 cents as we go through the switchover,” Weinholzer says. “Generally, the highest prices are during the summer, between June and August, but this is definitely a welcome relief at the pump that we’re seeing.”

The current statewide average of $1.82 is the lowest in Iowa since February of 2009. Iowa’s cheapest gas is now selling in Davenport at $1.71 while it’s most expensive in Des Moines at $1.88.