You are here: Home / News / Trump, but no Palin, in Norwalk this morning 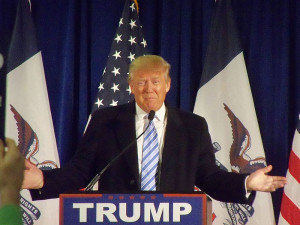 Republican presidential candidate Donald Trump spoke to a crowd of about 300 in Norwalk this morning.

“We had a big day yesterday,” Trump said at the start. “Yesterday was amazing in every way.”

“Sarah came along and she said: ‘We love what’s happening,'” Trump said. “It’s a movement and no matter where we go, it’s a movement.”

The Trump campaign had said this morning’s Norwalk event would feature a “special guest” but it was just Trump — no Palin. Trump’s campaign manager told The Washington Post Palin was already in Oklahoma City with him this morning. Palin and Trump are scheduled to headline a rally later today in Tulsa, Oklahoma.