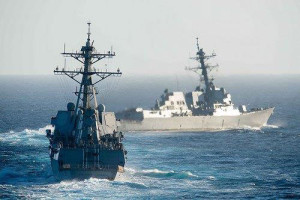 “Our U.S. Navy has set a goal of establishing half of their fuel needs being met through biofuel, domestically produced,” Vilsack says. “The reason they are is because the Pacific Theater, the ships and planes in that theater depend far too more than they should on fuel that has to go through the Strait of Hormuz.”

The Strait of Hormuz is a slender pathway that connects the Persian Gulf to the Arabia Sea.

“Look at your globe. Ask yourself as you look at that Strait of Hormuz how you feel about your Navy being dependent on fuel supplies going through that strait,” Vilsack says. “Take a look at the countries on either side of that strait and ask yourself whether or not you’re comfortable with that or whether you would prefer having that fuel produced in places like Iowa.”

Vilsack and the Secretary of the Navy boarded a helicopter today and landed on a naval destroyer to illustrate the Navy’s move to use biofuels.

“That destroyer is going to be refueled with biofuel made with beef tallow from the Midwest,” Vilsack says, “an exciting new opportunity.”

The Navy, the U.S.D.A. and the U.S. Department of Energy are collectively spending half a billion dollars to develop biofuels for planes and ships.

“So that we can meet this important national security need through the biofuels industry,” Vilsack says.

The waste beef tallow or fat came from Midwestern farmers, but the fuel was blended by a California-based company that won a Navy contract to supply nearly 78 million gallons of the fuel for just over $2 a gallon.