You are here: Home / News / An early ‘sort’ in Clinton, Iowa, this Saturday as both Clinton & Sanders appear 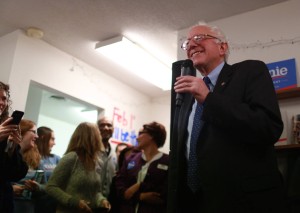 Clinton, Iowa, will be the center of attention for Democrats Saturday as both Hillary Clinton and Bernie Sanders hold events in the city.

Jean Pardee, the chairwoman of Clinton County Democrats, is laughing at the timing of the events.

This Saturday, Pardee says it will be difficult, but maybe not impossible to dash from Clinton’s event at an elementary school on the northwest edge of Clinton to the Sanders event downtown at the Masonic Center in Clinton. Both Clinton and Sanders have been to Clinton before this campaign season, but Clinton was the first candidate to signal she was returning on Saturday. 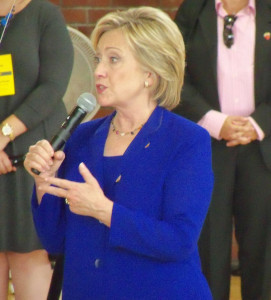 “Originally, before Sanders announced his, Martin O’Malley was going to have an event here and they decided there would be a traffic congestion problem and so they moved theirs to Jackson County, Maquoketa,” Pardee says. “Otherwise we would have been trying to do three of them at the same time.”

As of January 4, 2016, there were more than 30,000 registered voters in Clinton County and about a third of them were registered Democrats. Pardee can’t tell who’s winning Clinton County, but she says the Clinton campaign got a good head start, with more staff on the ground who had more experience than the Sanders team.

“So that made me feel that the likelihood was that Clinton was in the lead, but it’s got to be, by my impression, quite close,” Pardee says. “But I tend to be pretty cautious about predicting those things.”

Eight years ago, Barack Obama carried Clinton County. It is Iowa’s 11th largest county and Pardee guesses one reason for the attention this weekend is the candidates will focus their attention on the state’s top 10 counties the following weekend in the lead up to the February 1 Caucuses. Those who turn out for Clinton’s event this Saturday afternoon will hear from a candidate who’s been arguing she and rival Bernie Sanders have different ideas about how to drive progress.

“There’s a lot to like about some of his ideas, but ‘in theory’ isn’t enough,” Clinton said in Indianola yesterday. “A president has to deliver in reality.”

Clinton has been stressing her own “achievable” agenda and suggesting Sanders doesn’t stress his own foreign policy agenda because it sounds like he hasn’t “thought through” some of his ideas.

“He’s suggested we invite Iranian troops into Syria. That is like asking the arsonist to be the fire fighter,” Clinton said at Simpson College Thursday. “As bad as things are in Syria — and they are — more Iranian troops are only going to make it worse.”

The Sanders event in Clinton is set to start at about 3:30 Saturday afternoon.

Sanders is countering Clinton by citing his own supporters’ enthusiasm for the “political revolution” he describes.

“The inevitable candidate does not look quite so inevitable as she did eight and a half months ago,” Sanders said Tuesday.

Sanders will start a four-day swing through the state on Saturday. Clinton held a rally in Iowa City with pop star Demi Lovato last night. Clinton will be on the Iowa campaign trail this weekend, plus Clinton has celebrities coming in to cajole Caucus-goers, like movie star Jamie Lee Curtis and Tony Goldwyn, the actor who portrays the president in the ABC TV series “Scandal”. Sanders is bringing in Howard Dean’s brother, Jim, who leads the Democracy for America political action committee.