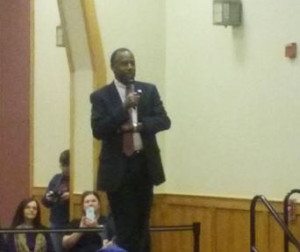 Republican presidential candidate Ben Carson has returned to the campaign trail after the death of a campaign volunteer.

Carson temporarily suspended his campaign to be with the family of 25-year-old Braden Joplin following the crash on I-80 on Tuesday, but Carson said he never considered pulling out of the race altogether.

Carson is campaigning in western Iowa and during a “town hall” meeting last night in Atlantic, Carson accused Democrats of proposing “socialism” for the country.

“They like to say: ‘It’s those rich people, those evil rich people and if we just take their money, everything will just be fine,'” Carson said. “Everything will not be fine. We’ll just have everyone being poor then.”

Carson at one point led in polls here in Iowa. Most recent polls show he’s dropped back into third or fourth place and Carson said he’ll keep holding town hall meetings around the state to make his case in person.

“The more people you get in front of, the more people get to hear you rather than what people have said about you, that’s really the key,” Carson told reporters in Atlantic.

Carson was in Clarinda early this morning. He’ll make a midday stop in Mount Ayr and an early afternoon stop in Creston. This evening Carson will participate in an event in Des Moines hosted by the Black Entertainment Network.