You are here: Home / Crime / Courts / Dispute over ‘grain leg’ near Carroll airport headed to court 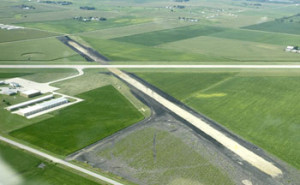 City photo of the Carroll Airport.

The Carroll Airport Commission is going to court to try to resolve a long-running dispute with a local farmer.

Airport officials say the grain handling tower Loren Danner built on his farm south of the Carroll airport is a flight hazard.

It’s called a “grain leg” and it’s a permanent, upright tower that funnels corn and soybeans into a bin.

“We were not notified and were not aware of its planned construction or construction until after the grain leg was fully constructed,” Commission member Greg Siemann says. “That was done in a matter of days.”

The lack of notification is a violation of local ordinances, according to Siemann. Kevin Wittrock, who is also a member of the Carroll Airport Commission, says the structure is obscured under a plane’s left wing as it comes in to land on two of the runways.

“If you fly a standard flight pattern to land on the runway, oddly enough you’ll go right over that grain leg,” Wittrock says. “…We feel it’s going to be a hazard.”

A trial date has been set for June 28. Commission members say they’re not necessarily looking for complete removal of the structure and reducing its height by at least 61 feet would answer their concerns.

Danner says the “grain leg” cost about $300,000 to build and lowering the system by just 40 feet would cost him another $200,000 because of the conveyors he’d have to install to handle his grain. Danner obtained a special permit from Carroll County officials for construction of the grain handling tower. In 2013, a county official said the FAA had determined the tower could remain if it was properly lit at night.