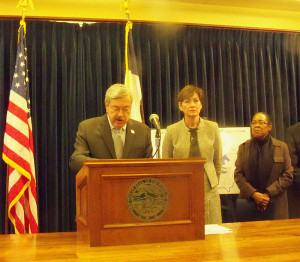 State and local officials announced a massive grant approved for Iowa from the U.S. Department of Housing and Urban Development to go toward flood reduction and the improvement of water quality. Lieutenant Governor Kim Reynolds says the grant is nearly $97 million.

“From water infrastructure projects in Dubuque, Coralville and Storm Lake, to investments in our rural landscapes. This grant will build on the great work that has already been done and that they have been working on,” Reynolds says. The grant approved for Iowa is the fourth largest in what is called the National Disaster Resilience Competition.

Governor Terry Branstad was asked about criticism that this public money is being spent on what some consider to be a private problem. “It’s a public problem. It’s a problem we all have,” Branstad replied. “We want to reduce flooding. I go way back with this — the flood of ’93 — and we lived through that here in Des Moines. Des Moines was the largest city at the time that had lost its waterworks because of flooding. And a lot of work has been done to mitigate that.” 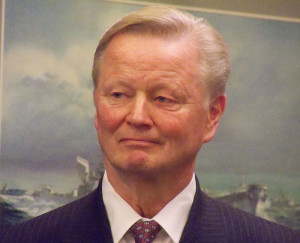 Dubuque will use part of the money for flood mitigation on what’s called the Bee Branch Project. Mayor Roy Buol says the area has suffered from repeated flooding after heavy rains.

Buol says this project alone has a cost of $200 million. He says they will also work on the homes that have failing foundations, mold and appliances that were destroyed repeatedly. Buol says the money will help them move some of the sewer expansions ahead to create enough capacity to move the water out of the neighborhoods. While they have already been working on the project with state and local money, he says the federal dollars give it a big push ahead.

“Those projects would have had to wait up to 20 years maybe before we could actually find the funding to actually implement them,” Buol explains. “So, this is going to be a big help in getting this project to the place where it will handle those 500-year storms in a much shorter period of time.”

HUD regional administrator, Jennifer Tidwell, says the cooperation among all levels in Iowa impressed them. “It is evident that the state of Iowa’s partnerships have worked extensively through this competitive process to strengthen their plan to reduce flood risk and improve water quality,” Tidwell says.

The nine watersheds involved in the grant are: Bee Branch Creek; Clear Creek; East Nishnabotna; English River; North Raccoon River; Middle Cedar River; Upper Iowa; Upper Wapsipinicon River and the West Nishnabotna River. The amount of money given to each area is still being worked out as they move ahead with the formal contracts. It is expected to take three to five years to complete all the work.