You are here: Home / News / State to study I-80 as it prepares for overhaul of the highway 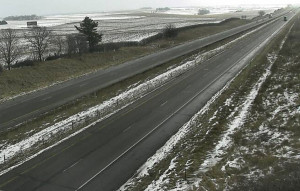 View of I-80 in Johnson County from a DOT traffic camera.

Interstate 80 was built through Iowa over five decades ago and the Department of Transportation is gearing up for an overhaul of the roadway that stretches 306 miles between Davenport and Council Bluffs.

The Iowa DOT’s Wes Mayberry says traffic volumes on I-80 are higher than ever before.

“It grows every year, two-to-three percent in different areas, and it’s going to continue to grow,” Mayberry said. In addition to the increased traffic, there’s heavier equipment on I-80 — adding to the wear and tear.

The reconstruction of I-80, in many areas, will involve an expansion. “Basically, at a minimum, you’ll probably see an extra lane added in each direction,” Mayberry said. There are already three or more lanes along stretches of I-80 around Council Bluffs, Des Moines, Iowa City, and Davenport. It’s unclear exactly where and when other sections of the interstate could be increased to three or more lanes.

“That’s part of this study, to help us identify which segments need to be reconstructed first,” Mayberry said. The Iowa Department of Transportation is asking for feedback on the future of Interstate 80.

A series of reports are being posted to the DOT’s website and Iowans can take a survey on the website to provide their input.