You are here: Home / News / Trump and Cruz fire at one another in battle for support in Iowa 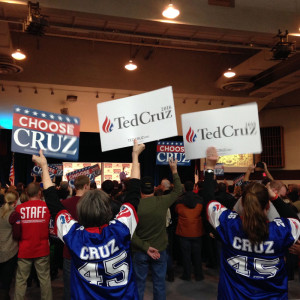 The two Republican presidential candidates sitting atop the polls in Iowa campaigned here Saturday, expressing confidence their supporters will turn out on Caucus night — but each conveyed that message in different terms.

This is how Donald Trump put it during a rally in Sioux Center at Dordt, a private Christian college: “My people are so smart. And you know what else they say about my people, the polls? They say I have the most loyal people. Did you ever see that, where I could stand in the middle of (New York’s famed) Fifth Avenue and shoot somebody and I wouldn’t lose any voters, O.K.? It’s, like, incredible.”

The crowd in Sioux Center laughed.

Ted Cruz told a crowd at the Faith Baptist Bible College in Ankeny that the “silliness” of the campaign up to this point doesn’t matter.

“You know, the Word tells us: ‘Weeping may endure for a night, but joy cometh in the morning,” Cruz said, quoting from Psalm 30, to affirmative shouts and applause from the crowd.

Glenn Beck, founder of The Blaze and host radio and TV programs, was in Iowa Saturday to endorse Cruz and Beck urged Iowans to reject Cruz’s primary competitor.

“If Donald Trump wins, it’s going to be a snowball to hell,” Beck said.

Beck called Trump “arrogant” and “dangerous” for the country. Beck told the crowd in Ankeny that he had prayed “for the next George Washington” and believes he’s found him in Cruz. Beck then loaned Cruz one of his prize possessions: a compass Beck said was the only one ever used by George Washington.

Trump held two rallies of his own in Iowa on Saturday. Trump touted the endorsement he got Tuesday from Tea Party icon Sarah Palin and dismissed Beck as a “loser”.

Trump also joked Cruz should run for prime minister of Canada instead of president of the United States.

“When they heard about this thing, that he was born in Canada that nobody knew about, he lost a lot of people. He’s gone down big in the polls,” Trump said. “…That doesn’t mean he’s not giving us a fight in Iowa. That doesn’t mean you can stay home…You’ve got to go out because we can’t take any chances.”

Senator Chuck Grassley created a bit of buzz when he went on stage to speak at Trump’s rally in Pella. While Grassley incorporated Trump’s “Make America Great Again” slogan in his remarks, Grassley did not endorse Trump and has been attending events for GOP presidential candidates when invited. Grassley walked the State Fair grounds this summer with Jeb Bush and Grassley is scheduled to stop by a Marco Rubio event next weekend.

Grassley praised Trump’s supporters for their “energy” and said it would be needed if Republicans are to win the White House in 2016.