You are here: Home / News / Branstad says he has ‘responsibility’ to be ethanol advocate, Cruz critic (AUDIO) 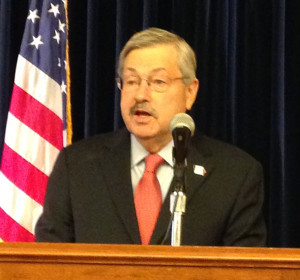 Governor Terry Branstad this morning said he has no regrets about saying he hopes Texas Senator Ted Cruz is “defeated” in next Monday’s Iowa Caucuses because Cruz opposes the federal ethanol production mandate.

“I just gave an honest answer to a point-blank question,” Branstad said.

Branstad held his weekly news conference in his statehouse office this morning and the governor dismissed the idea his comments mean he is no longer a neutral player in presidential politics.

“This is important to our state’s economy and I want to make sure that the voters of Iowa are knowledgeable and well-informed on all the candidates and that they get out and vote in those caucuses because it’s critical to our economy,” Branstad said.

AUDIO of Branstad’s morning news conference; conversation about this topic starts at 8:10 mark.

Branstad’s remarks about Cruz were blasted by fellow Republican Steve King, the northwest Iowa congressman who has endorsed Cruz . King suggested Branstad was motivated by his son’s paid work on behalf of America’s Renewable Future, a lobbying group that’s been critical of Cruz.

“I don’t like to see anybody ever attack any member of my family,” Branstad said. “And I’m proud of what my son has done.”

Branstad said he and King “are long-time friends” and they will continue that friendship after the Caucuses are over. The two did talk about this controversy, but Branstad’s revealing little about that chat.

“We’ve continued to look together on a lot of things and so we had a really, I think, constructive conversation,” Branstad said.

A Super PAC supporting Cruz has bought air time in Iowa to run an ad suggesting Branstad is “owned” by the “lobbyist thugs” in the ethanol industry. Branstad said allies of Cruz and Hillary Clinton’s campaign are trying to “score points” by running ads attacking him.

“I’ve been attacked and I’ve been attacked regularly by a lot of people, but that doesn’t bother me because I recognize my responsibility is to the people of Iowa and to be an advocate and a supporter of the things that are important to them,” Branstad told reporters.

Branstad said Iowans care most about “economic opportunities, good jobs and farm income.” Branstad is in his sixth term as governor, but he has only publicly backed a presidential candidate before the Caucuses once. Branstad endorsed Bob Dole in 1995 and campaigned extensively for the Kansas senator before the 1996 Iowa Caucuses.