You are here: Home / Education / Iowa students stranded in the nation’s capital by storm 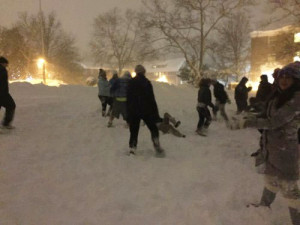 Remsen St. Mary’s students play in the snow while stranded in Washington, D.C.

A group of Remsen St. Mary’s students, chaperones and school officials are stranded on the east coast after participating in the “March for Life” in Washington, D.C.

Remsen St. Mary’s principal, Pete Haefs, says 24 students, or about one-third of the high school, and eight chaperones are with him at the National 4-H Center located in Chevy Chase, Maryland, waiting for their chance to return home. He says there looks to be more than two feet of snow as it is well past his knees in a deeper spot.

The annual “March for Life” on Friday marked the anniversary of the Supreme Court decision that legalized abortion. Haefs says the 4-H Center has been a good place for the students to wait.

“They’ve been absolutely wonderful working with us, giving us access to their movie areas so we can watch some movies. And the game room so we can play some games. And we happen to be truly blessed to be snowed in with another group of Catholic school students from the Twin Cities area,” Haefs says.   “So, they’ve been socializing a lot, had a few snow fights out in the snow.  And just really been bonding in prayer and fellowship with each other, and just running around in the snow and playing games like Midwesterners would do.”

Nearly every store is closed because of the snow storm, and trucks are unable to travel on the streets and highways, but he says his group still has food. He says the bus company picked up some snacks during the march and the 4-H Center serves meals. “So they have been very gracious to make sure that we are stocked with food. We’re comfortable warm and well fed,” Haefs says.

Haefs says the students’ attitude has been great throughout the experience, and he anticipates the group will be able to return to Iowa sometime this afternoon.