You are here: Home / News / Part of state under a Winter Weather Advisory 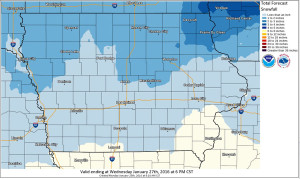 It’ll be a far cry from the weekend winter storm that buried much of the East Coast, but a new weather system will roll over Iowa today that should bring a few inches of snow — and likely a bit of ice.

Meteorologist Craig Cogil, at the National Weather Service, says a wide section of the state will be under a Winter Weather Advisory from this afternoon into tonight.

“What we’re looking at is a system that’s going to move up through the state today and produce light freezing drizzle and snow primarily across the northwest half of the state this afternoon,” Cogil says. “This will change to all snow as we head later into the afternoon into the evening. Heaviest amounts, Waterloo and up towards Decorah, maybe two to four inches up in that area.”

While much of Iowa’s southern half is forecast to only get an inch of snow or less, it’s possible ice could form and cause far greater problems for motorists. “Certainly, during the day today, across about the northern half or northwestern half of the state, some glazing of the roads with light freezing drizzle could cause travel problems into the afternoon,” Cogil says, “and certainly continue as that changes to snow and that snow falls on top of the ice.”

Temperatures have been colder than normal lately in many parts of the state but that could be about to change. “It does look like after this system moves out, we will see some gradual moderation for the remainder of the week as we head into Thursday and Friday,” Cogil says. “We may see temperatures into the 30s and even lower 40s across the state as we warm up.”

See the full forecast at www.weather.gov.