You are here: Home / News / Governor Branstad does ‘The Dab’ with ISU basketball team 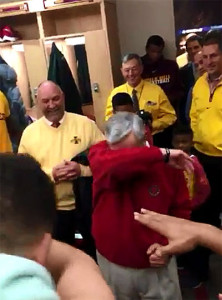 Iowa’s governor went into the Cyclone locker room last night to celebrate the Iowa State victory over Kansas and did a little dancing.

Branstad did it, dipping his head, raising his right arm — sort of like the way you’re supposed to stifle a cough. It’s a hip hop dance move.

Cam Newton — the quarterback for the Super Bowl-bound Carolina Panthers — did The Dab quite famously after scoring a touchdown in week 10 of the NFL season. When it comes to basketball, a video of NBA star Lebron James Dabbin’ during pregame warm-ups in early October has gone viral, too.

The Dab can be traced back to this summer and a recording from an Atlanta-based hip hop group called Migos which features the line: “Look at my dab.”