You are here: Home / News / 2016 path different for past Caucus winners Santorum, Huckabee 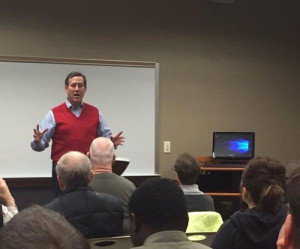 The two Republicans who’ve won the past two Iowa Caucuses are traveling the state, employing devices that helped capture the attention of voters in years past, hoping to spark another come-from-behind victory on Monday.

Rick Santorum said earlier this year he wasn’t going to wear the sweater vests that became an item during his 2012 campaign, partly because his daughter’s didn’t like the fashion statement.

But Monday, Santorum adopted a “Fear the Vest” hashtag on Twitter and embarked on what the campaign called the “inVest in America” tour. Santorum has been telling Iowa audiences they are the “human resources department” for the country.

“I’m going to trust you to actually look at the candidates and make the decision that who the best person on the issues, with experience, with the leadership qualities and the ability to lead this country at a very difficult time,” Santorum told a crowd last week.

Santorum is arguing a political newcomer can’t handle the responsibilities of the Oval Office.

“I can understand people are angry. Channel the anger into a productive result, not one that says: ‘I’m angry. I want to blow things up,'” Santorum said, his voice rising to a shout. “It’s your country!” 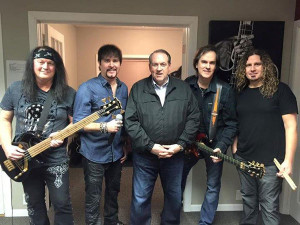 Mike Huckabee is the other candidate hoping for a do-over win and last weekend he returned to the site of an electric moment during the 2008 campaign. Huckabee again took the stage at The Surf Ballroom in Clear Lake to play his bass guitar with the band Firehouse.

During a recent interview after a campaign stop in Winterset, Huckabee said voters are angry about a lot of things, including moral decay and income stagnation.

“If you really get down to it, what people are upset about, I think above anything else, is they feel like the people that get elected play by a totally different set of rules,” Huckabee said.

Huckabee has a new name for his town hall meetings this time around: “Huckabee Huddles”.

“We didn’t just drive by and wave or get out and take a picture at the country courthouse,” Huckabee said. “We actually held town halls and we talked to people, answered their questions.”

Huckabee’s campaign has recently been stressing the phrase: “Moral Clarity Matters” — a subtle shot at rival Ted Cruz who said in a secretly-recorded conversation at a fundraiser that ending gay marriage would not be one of his top priorities as president.

“Consistency means you say the same thing whether you’re in Marshalltown or Manhattan,” Huckabee said.

Neither Huckabee nor Santorum have met Fox News criteria for appearing on the main debate stage in Des Moines Thursday night. Huckabee is a critic of the way the Republican National Committee has managed the debates.

“The sad thing is that rather than this be the most thoughtful approach to selecting a nominee, we’ve turned it into a game show,” Huckabee said.

Huckabee told reporters early this month that he needs a solid showing on Monday night. If he finishes in a “distant fourth, fifth or sixth place,” Huckabee said there’s “no pathway forward” and he’ll end his 2016 campaign.