You are here: Home / News / Clinton says she ‘will be a better president’ because of Iowa experiences 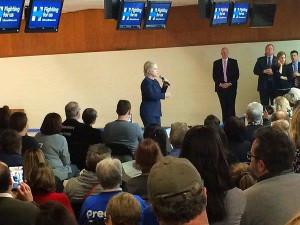 The business was recently purchased by a young man Clinton met last spring. Clinton told the crowd the roundtable chats she held nine months ago have shaped her campaign message.

“I know that I will be a better president because of what I have learned here in Iowa,” Clinton said. “And I am asking all of you to go to the Caucus Monday night because if you stand up for me then I will stand up and fight for you as hard as I can to make sure we go forward together in America.”

Clinton spoke for more than 40 minutes. She blasted Republicans and barely mentioned her two rivals for the Democratic Party’s presidential nomination. Clinton’s voice rose as she criticized “price gouging” on prescription drugs and American companies that establish a corporate presence in another country to avoid paying taxes in the U.S.

“Don’t just focus on one thing in this campaign,” Clinton said. “We’ve got to take all of these abuses on. We have to go after everybody who is trying to undercut America’s prosperity and America’s future.”

Clinton said she, Bernie Sanders and Martin O’Malley all agree that Wall Street shouldn’t be allowed to “wreck” Main Street again. Clinton offered this as her closing pitch: “You get the first chance to speak up in the entire world about what you’re looking for and I would be deeply honored and grateful to have your support Monday night and I will work my heart out.”

Clinton has no other public events in Iowa today. She’ll campaign in Newton and Keokuk tomorrow.