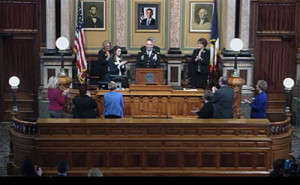 The leader of the Iowa National Guard talked about the changing mission of the organization in his annual report to the Iowa Legislature and Governor today.

Major General Tim Orr spoke about decision of the U.S. Secretary of Defense to open all combat roles to women.

“As a result of this policy change, nearly 1,700 positions in the Iowa National Guard have opened to Iowa women this year for the first time in our nearly 180-year history,” Orr says. Orr says it did not take long for the change to impact the Iowa National Guard as high school students Cheney Spaulding of Fort Dodge and Dakota Doocy of Lone Rock enlisted in artillery positions as females for the first time in ING history, and University of Iowa sophomore Megan Reaska became Iowa’s first female combat engineer in December.

Orr says there are now approximately 15 soldiers and airmen deployed around the world, which is among the lowest number of deployed service members since the start of Operations Enduring and Iraqi Freedom.

But he says one Iowa unit is serving around the world on a daily basis. “Airmen from the 185th Air Refueling Wing from Sioux City are deployed worldwide, providing ongoing refueling support of real-world missions to the Air Force, Army, Navy, Marine Corps, and coalition forces,” Orr says.

“In the past year, the 185th has deployed more than 320 Airmen for nearly 15,000 active duty days. During this deployment cycle, Airman from the 185th deployed to nine countries in support of Central Command operations, flying 137 missions for 1,100 mission hours, while refueling coalition aircraft with more than 22 million pounds of fuel,” according to Orr.

He says two Iowa Army National Guard units and several individuals have been identified for potential overseas deployments in 2016.

Orr says the need to deploy units around the globe has continued to decrease, but that could change. He says with the decrease deployments, the Iowa Guard has put more time into training. “We sent units to: Korea, Camp Guernsey, Wyoming; Camp Rapid, South Dakota; Fort Campbell, Kentucky; Red River, Texas and to the Joint Readiness Training Center, Fort Polk, Louisiana — which is the Super Bowl for the Army every year — among other locations,” Orr says. He says the 2nd Infantry Brigade Combat Team will deploy to Alaska this summer for a 21-day annual training event, where they will help prepare active duty Army units for an upcoming Joint Readiness Training Center rotation. In addition, elements of the 2nd Brigade headquarters will conduct annual training in Turkey and Korea to support Army command post exercises.

Orr says the joint training with the Army Reserve and active duty Army is a new concept. “It’s called the Total Force Partnership program, and it is the first of its kind in the Iowa National Guard,” Orr says. “And in our case, the Total Force Partnership program establishes a formal relationship between the Army’s 101st Airborne Division and Iowa’s 2nd Infantry Brigade Combat Team.”

Orr also talked about the economic impact of on the state. He says theIowa National Guard brought in more than 353 million dollars of federal funding into the state, which is more than 97 percent of the department’s budget. “This past year, the Iowa Army and Air National Guard executed nearly 20 million dollars in federal funds for our construction and capital projects program. We completed new construction, renovations or additions at the Mason City, Clinton, and Sioux City armories, and at the Iowa Air National Guard Base Des Moines,” Orr says. He says they currently have renovation and construction projects underway at the Council Bluffs armory and Field Maintenance Shop, the Dubuque armory, and the Iowa Air National Guard Base Des Moines.

Orr also talked about the response to natural disasters in the state. “I am very pleased to report that 2015 has been a relatively quiet year for our emergency response operations. We used this additional time to plan, prepare, and exercise for potential disaster response on a multitude of scenarios,” Orr says. Orr says the Guard held a training exercise that partnered local, state, and federal agencies, and the United States Northern Command to evaluate the organization’s response to multiple disasters.

Orr wrapped up his address by saying the Iowa National Guard will continue to remain “Mission-Focused and Warrior Ready.”