You are here: Home / News / Harkin says part of Sanders’ popularity is because he is new 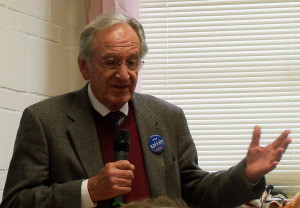 The man who was the top elected Democrat in the state until retiring believes former Secretary of State Hillary Clinton will withstand the challenge to win the Iowa Caucuses Monday night over challenger Bernie Sanders. Polls show the race between the two Democrats remains tight.

Retired U.S. Senator Tom Harkin is a Clinton supporter, and says he can see why Sanders is doing well here. “Hey come on, he’s a captivating individual, he has a great personality, he has a great speaking style, and he has an air of authenticity about him that’s not phony, I mean it’s real. I know him, and so that cuts through,” Harkin says.

Harkin says it’s not unusual for a candidate to catch the attention of younger voters like Sanders has. “It just seems like in every, every caucus, every presidential year, like a lot of things, there’s always the unique, there’s the new. Let’s face it, mostly young people tend to like it. Young people tend to like new things,” according to Harkin. “I think a lot of that is Bernie, he’s unique he’s new. He hasn’t been out for 20 years on the national scene like Hillary has been out there.”

Harkin says this won’t be like 2008 when Clinton faded against Barack Obama. He says she has run a better campaign this time then she did in 2008. “Hillary Clinton did what I called a 40-thousand foot bombing run over Iowa. Barack Obama was like the Marines down in the weeds — door-to-door, house-to-house. People forget how hard he worked,” Harkin says.

Harkin says the candidates who catch on as the “new thing” in the early campaigning often fail because their ground game in meeting Iowans isn’t good enough. He cites Howard Dean, who was the front runner in 2004, but failed to get the nomination.

Harkin was asked if he thinks Sanders is like Dean. “Well I don’t know. Because I don’t know the intricacies and how they’ve done on their campaign,” Harkin responded. “I have a feeling it is a little bit like it — in terms of thinking that enthusiasm in August and September and October and November…will carry the day in February.”

Harkin made his comments at an event promoting affordable child care.