You are here: Home / News / Iowa moves up to second in electricity created by wind power 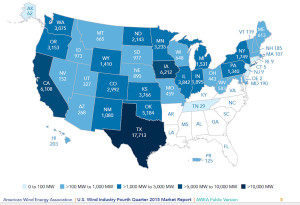 The American Wind Energy Association’s fourth quarter report shows Iowa has moved one rung from the top when it comes to producing power from the wind.

“We actually saw Iowa move past California into second place in our state rankings. Iowa now has more than 6,000 megawatts of installed capacity,” AWEA manager of data and analysis John Hensley says. “We saw somewhere in the realm of about 300 megawatts come online in the state in the fourth quarter that helped push it up in the rankings.”

Iowa moved past California by 104 megawatts, but would have to triple its output to overtake top-ranked Texas — which has nearly 18,000 megawatts. Hensley says Iowa was part of a trend that saw more wind turbines come online across the country.

He says wind will account for around one-third the electric power produced in Iowa. “Back at the end of 2014, wind was providing 28.5 percent of the state’s electricity-mix with windpower….The full results are not out for the year yet, but we do expect it to come into that 30 percent threshold,” Hensley says. He says Iowa has several things going for it when it comes to wind energy.

“Iowa is just a really attractive place for wind energy developers to install new projects,” according to Hensley. “It’s a state with a sort of strong, favorable policy environment, combined with a really great wind energy resource.” He says Iowa’s location also makes it good for distributing the wind power.

Hensley says improved technology has helped lower the cost of installing wind power, and that has helped continue the expansion of capacity. “The primary innovations that we’ve seen are taller towers — so getting the machine actually higher up into the air — and the advent of longer blades. These long blades have a larger rotor diameter, which allows them to capture more wind resources than they did before,” Hensley says.

AWEA figures show there are now 74,472 megawatts of installed wind capacity in the United States and more than 52,000 operating wind turbines.