You are here: Home / News / Overflow crowd lining up for Trump event at Drake University 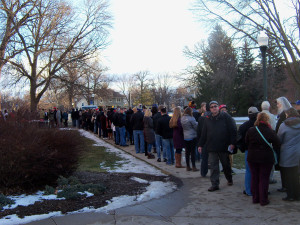 People waiting to get into the Trump event.

A large number of people are expected at tonight’s event held by Republican presidential candidate Donald Trump at Drake University in Des Moines.

Trump opted to hold a fundraiser for veterans instead of attending the final debate with fellow Republicans before the Iowa Caucuses on Monday. 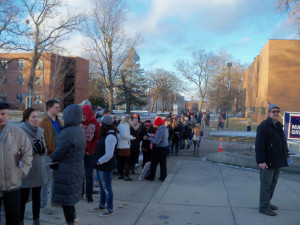 The line already stretches down the street.

People were already lined up down the street at 5 o’clock tonight, the time the doors were supposed to be opened to let them in.

Some will no doubt go home after being unable to get in.

Drake University has been made aware that tonight’s event in Sheslow Auditorium has been significantly over-ticketed by the Trump campaign.

Fire code limits occupancy of Sheslow Auditorium to approximately 700 persons. Therefore, based on our understanding of the number of tickets distributed, only a small percentage of ticket holders will be admitted into the auditorium.