You are here: Home / Business / Polaris laying off workers in Spirit Lake and Milford 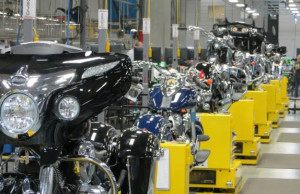 A company that makes motorcycles, snowmobiles, ATVs, and other vehicles is laying off around 100 workers, including some at production plants in northwest Iowa.

Kelly Basgen, spokesperson for Polaris Industries, says roughly half of the layoff are in the Twin Cities area, but operations in Spirit Lake and Milford are also affected.

“I can confirm that we have a really small number between Spirit Lake and Milford that were among the positions eliminated,” Basgen said. “I would say less than 10 between the two locations.”

The two Polaris plants in the Great Lakes region have more than 1,000 employees. In 2014, the Iowa Economic Development Authority awarded Polaris $300,000 in direct financial assistance and tax incentives toward an expansion project at the Milford facility.

“Thoughtful attrition, reduced use of contractors and temp-agency workers, and the closing of open, planned, or budgeted positions,” Basgen said. That’s in addition to the roughly 100 layoffs announced this week.