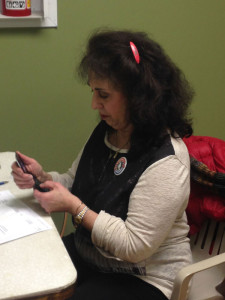 Tens of thousands of volunteers have put in countless hours trying to help their chosen candidate cross the caucus finish line at the front of the pack.

And Gervais made a lot of phone calls.

These campaign volunteers sometimes wind up as the front-line defenders of their chosen candidate. Gervais has run into Iowans who’ve heard about Governor Branstad saying he hopes Cruz is defeated in the Caucuses, because Cruz opposes the federal ethanol production mandate.

“I find that there is a huge misconception about Ted Cruz and some of the Iowans, the farmers, believe it,” Gervais said. “…Ted Cruz is for ethanol and he’s for the farmers. He just doesn’t want Washington to get in the way.”

For months, Susan Kerss of Des Moines has been volunteering at least twice a week at a Clinton campaign calling center that’s about nine blocks from her house.

“I’ve never been through this process, except back when I was a teenager. I was a ‘Goldwater Girl’,” Kerss said earlier this month, with a laugh.

So was Hillary Clinton, back in 1964 when Barry Goldwater was the Republican nominee for president. Kerss is now 67 — just a year younger than Clinton. Like all the Clinton callers, Kerss uses a “one” or a “two” or a “three” to categorize the people she speaks with. A “one” is a person who is definitely going to caucus for Clinton. A “three” is, well, squishy — a maybe.

“If you catch them at being ambivalent and they’re willing to listen to your little speech about why you support Hillary Clinton, I think you get them to at least think about it,” Kerss said.

She admitted making phone calls for hours at a time is a grind, but she does it nonetheless.

“I think it’s really an honor to be the first in the nation and I think everybody should get involved,” Kerss said. “…If we want to keep our democracy, we have to show up.”

Stephanie Montgomery shows up at Bernie Sanders’ state campaign headquarters in Des Moines at least once a week to make phone calls. Montgomery has found “name recognition” for Sanders can be an issue when she does get through.

“You know, they’re not as sure,” Montgomery said. “But I have found a remarkable number of the people that I’m actually able to talk to that know who he is and are very excited about what he has to say.”

“I think everybody from whenever they got these lists probably no longer have these numbers and have cell phones now,” Mason said two weeks ago, “so it’s rare to find somebody on these lists.”

Republican Rand Paul’s campaign is hoping to cash in on phone banks. The Paul campaign this week said it had made 800,000 phone calls to likely Iowa Caucus goers. Eric Woolson, a veteran of Republican campaigns like George W. Bush’s in 2000 and Mike Huckabee’s in 2008, said at this point the “organic” work of volunteers is more important than what the paid campaign staff may be doing.

“Having those volunteers out there that get very excited about a candidate and are willing to go out and talk to their friends and neighbors face-to-face and close the deal,” Woolson said during a recent interview.

Brad Anderson, a veteran campaign operative who worked on the John Edwards campaign in 2004, has been volunteering for Clinton’s 2016 campaign.

“I can tell you in the calls that I’ve made and the doors that I’ve knocked there are still a lot of people out there who do not know their caucus location,” he said during a recent interview.

Anderson was a candidate for Iowa secretary of state two years ago and in 2012 Anderson ran Barack Obama’s reelection campaign in Iowa.

“Cell phones have changed everything in a lot of ways,” Anderson said.

According to Anderson, there are a lot of disconnected landline numbers on the voter files the campaigns purchased from the state party.

“This is why I think every organizer will tell you if they have someone who was either going to make calls or knock on doors, 10 times out of 10 they would ask the person to knock on doors,” Anderson says. “When you’re knocking on doors, of course, you’re not dealing with phone numbers. You’re dealing with live human beings. You can actually hand them information and there is just nothing more valuable to a campaign than a one-on-one connection at a door.”