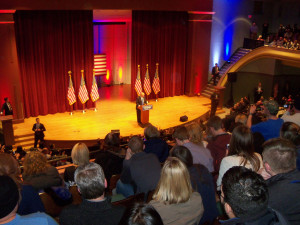 Donald Trump didn’t attend the final Republican presidential debate in Des Moines, but it didn’t take him long to mention it during his event to honor veterans at Drake University.

Trump says he decided not to attend the debate because of the way Fox Television treated him. He joked about that. “Fox has been extremely nice — the last number of hours actually — and they’ve wanted me there. And they said ‘how about now,’ the called a few minutes ago (and said) ‘how about now can you come over.’ And I said hasn’t it already started,” Trump says.

Trump says the event to help veterans became bigger than he thought it would and once it got started he couldn’t leave it. He also talked about how skipping the debate might hurt his campaign. “Is it for me personally a good thing, a bad thing, will I get more votes, will I get less votes? Nobody knows, who the hell knows,” Trump says. But it’s for our vets, and you are going to like it because we raised over five million dollars in one day.” 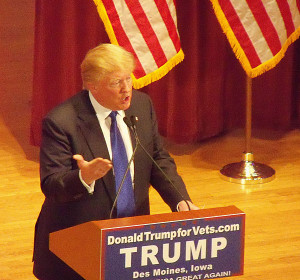 Trump said near the end of the event that they had actually raised more than six million dollars that will go to help veterans. Trump brought fellow Republican candidates Rick Santorum and Mike Huckbee onto the stage with him.

They were part of the undercard debate, and both also spoke in support of veterans.The event also included veterans who talked about the problem of veterans committing suicide, and the need to help them adjust to civilian life after they get out of the military.

The auditorium chosen for the event only held 700 people and several had to stand out side and watch the event on a large screen television.