You are here: Home / News / Bush says next president must have ‘steady hand’ 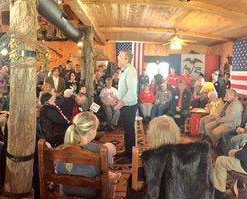 Republican presidential candidate Jeb Bush is in Iowa today, telling Iowa Caucus-goers the next president “has to be serious.”

Bush spoke to a crowd in Carroll early this afternoon, touting his eight-year record as Florida’s governor and how his state recovered after eight hurricanes and four tropical storms in 16 months.

“There are thousands and thousands of stories during my time as governor where I led. I didn’t talk about it. I did it,” Bush said. “…When you’re a leader, you have a focus on moving towards the fire, to take it out, to solve the problems and that’s what we need in Washington, D.C. right now.”

Bush told the crowd in Carroll that he’s wearing a wrist band given to him by the wife of an Army sniper from Oklahoma who was killed in Afghanistan. And Bush said the country needs “to be serious” about making national security a top priority.

“We’re not talking about a video game here,” Bush said. “The next president has to be serious, has to have a steady hand.”