New Jersey Governor Chris Christie is following up Thursday’s debate by taking his presidential campaign on the road across the state in the closing days before Monday’s Caucuses.

The Republican kicked off the tour with a small rally of supporters this morning in the Des Moines suburb of Johnston.

“Last night was a lot of fun, I always enjoy getting up on that stage and mixing it up with the other folks in this race. I thought it went really well. I felt good about the answers we gave. I felt good, most particularly because we answered the questions we were asked,” Christie says. “And what drives me the most crazy about those things are — you get up on that stage and people don’t like the question and they don’t answer it. They think that you’re not listening.” 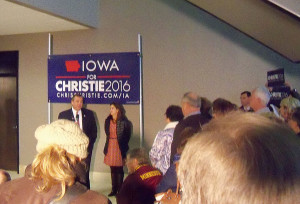 Christie says Iowans do pay attention and listen to the debates and what the candidates have to say, and it’s important to close the campaign out strong.

“Now we’re down to the last few days here and this is when most Iowans are making up their minds. And so, this corps group of people who are here this morning, you are the ones who are going to help us finish up the job of persuasion here in Iowa,” Christie says.

Christie says core message to Iowans is he is the one with the experience to get things done as president. “You have some people who like to talk and you have some 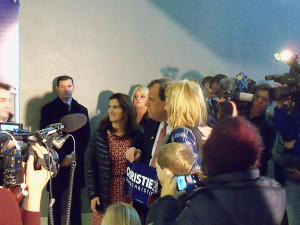 Chris Christie takes photos with supporters at his rally.

people who like to do. And you have some people who have been trained to do nothing but talk,” Christie says. “And some people whose life experience has been accomplishment, getting things done, being held accountable for what you do.”