You are here: Home / Military / Iowa officials on hand for launch of USS Sioux City 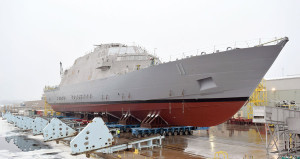 A naval ship named for Iowa’s fourth largest city will be launched this weekend.

Sioux City Mayor Bob Scott is among a group of city leaders in Marinette, Wisconsin for events surrounding the dedication of the U.S.S. Sioux City.

“From now, for at least 50 years, there will be a ship out on the ocean that’ll have our name on it and I think that’s kind of cool,” Scott said. The littoral combat ship is designed to detect mines. The commander of the ship, Kevin Ralston, and a dozen crew members visited Sioux City back in September.