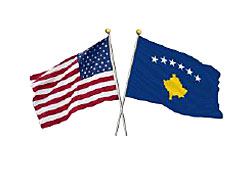 The first diplomatic consulate in Iowa is officially open in Iowa’s capital city.

Band members from the Iowa National Guard and the Kosovo Security Force joined to play the national anthems of Kosovo and the U.S. at the opening.

The deputy prime minister of Kosovo, Hashim Thaci, says his country decided to open its second U.S. consulate in Des Moines because of what Iowa did for his nation after the war in the Balkans.

“This is the time when the special friendship between Iowa and Kosovo started to take shape, even before Kosovo became a state. Hundreds of members of the Iowa National Guard became part of the peacekeeping mission since 2003,” Thaci says.

Iowa has since entered into a Sister State relationship with Kosovo. Thaci noted all the media attention Iowa is getting from around the world as the Iowa Caucuses approach. “In a few days the attention will move to other states and the media will leave. Kosovo is here to stay forever ,” Thaci said as the audience applauded. The consulate office is in the middle of Des Moines’ Court Avenue entertainment district downtown.