You are here: Home / News / Iowans head to the Caucuses to start presidential process 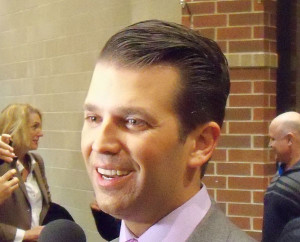 Some of the candidates attended Caucus sites this evening to make their case in person to Caucus-goers.

Donald Trump, along with his three adult children fanned out to several precincts in the central Iowa area.

Donald Trump Junior visited a caucus site at a church in West Des Moines to rally voters and says the Trump camp is ready.

“We’re feeling good, we’re really happy about it. We’ve put in a lot of work. I’ve been here on the ground meeting people and I’ve had so many come up and say to me ‘I haven’t caucused in x number of years and I’ve signed up and  I’m going to go and do it’,” he says.  He plans to speak to the Republican caucus goers about his day, and will wing it.

“Talk to them about him as an American, and about him as father, about him as a grandfather. Get that message out because I think that message is more meaningful for them. Again, I don’t have anything prepared, I’m just going to talk from the heart,” Trump Junior says. His dad has been a prominent businessman for many years, but this is his first time as a candidate. Is he nervous?

“This is the first time he has been on this side of the table, it is certainly unique,” Trump Junior says. “Again, I think he knows how well he is doing nationally and if it is not this, it’s going to be New Hampshire and South Carolina, and we are just going to keep our nose to the grindstone and keep going. There’s not stopping us, no one has a work ethic better than him — we are just going to keep going and take this all the way.

Trump Junior says the family will bet at their headquarters hotel to wait for the results. “Getting together and just watching the results as they come in. Hopefully they are positive.”

It’s unclear at this hour how large turn-out is for tonight, but Radio Iowa has talked with many of the voters inside tonight’s caucuses:

Tommy Mattick of Schaumberg, Illinois is a business major at Iowa State who started following Sanders in August on social media. “He wants to take money out of politics, so that’s the main reason why I support him.”

Sasha Temple of Camanche is an Iowa State student who’ll be attending a Caucus tonight. “No matter Republican or Democratic, I think you should go out and Caucus for whoever because you have the right to choose who you want and I choose Bernie.”

Thomas Mayes of Des Moines committed to Caucus for Martin O’Malley a couple of months ago because O’Malley was the mayor of a big city and the governor of a big state. “He governed well in both of those roles. Those are the attributes I’m looking for…he’s gotten things done rather than talk about getting things done.”

Diana Baker Hoy is a precinct leader for O’Malley tonight. She signed onto the O’Malley campaign in June, the first time she heard him speak. “It didn’t take me four, six, eight times to make up my mind about which presidential candidate to support,” she says. “I realized right then that he was the one.”

Brandon Foster of Clarinda is voting for Trump tonight. “He is part of the one percent, which most of here in Iowa or not, but I don’t think that really matters when it comes to his views and his policies.” Foster likes Trump’s “boisterousness” and Foster says Trump’s lack of political experience is a plus.

Mike Knight of Urbandale was volunteering at Cruz headquarters today and he’s caucusing for Cruz tonight. “He’s the closest to the constitution,” Knight says. “He actually is somebody that does what he says. He’s always stood up for what is right…and that’s the kind of president I want — somebody who will do what they say instead of changing their mind once they get to Washington.”

Twenty-seven-year-old Bethany Dorin is a piano teacher from Pleasant Hill who’s part of the Iowa homeschooling network  supporting Cruz.  “We have a chance here not only to help elect a president of the United States, but even choose from our own party that person we think is the right person,” she says. Dorin was making phone calls for the candidate this afternoon. “He went to the senate and he did exactly what he said he was going to do,” she says.

Dave Kennedy of West Des Moines listened to all the GOP candidates and he’s caucusing for Rubio tonight. He’s smart. He’s articulate. He’s conservative. I mean, you name it,” Kennedy says. “I’m just across the board a big supporter now.” His wife, Wendy Swanson, is supporting Clinton tonight, but…

“I would love nothing better than to have Marco and Hillary as the nominees,” she says, “because I would be totally happy with either one of them.”

Amy Guiter of Johnston is one of those late deciders. She went to a Chris Christie event on Friday, though, and liked what she heard. “Out of all of the Republican candidates, I think he could unite both sides of the party,” Guiter says. Guiter says too many candidates change their position on an issue, then try to deny the switch. “That’s one of the things I can’t stand,” she says. “And (Christie) said: ‘I changed my mind.’ And he admits it.” And that’s what she found refreshing about Christie.

Several members of the Radio Iowa staff contributed to this report.