You are here: Home / Fires/Accidents/Disasters / Parts of Iowa under a blizzard warning for late tonight 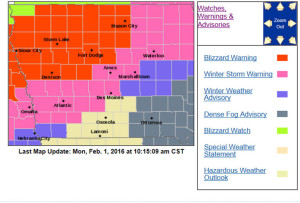 A blast of winter weather is moving toward Iowa and some 30 counties in northwest and north-central Iowa will be under a Blizzard Warning starting late tonight.

Winter Storm Watches and Warnings are also being posted. Meteorologist Kevin Skow at the National Weather Service, says snowfall amounts will range from 8 to 12-inches for a wide section of the state, though some areas will get much less, and other isolated areas could get much more, perhaps 18-inches.

“Our timing of the winter storm still looks to start impacting southwest Iowa Monday evening, moving across the entire state by Tuesday morning and lasting into Tuesday evening,” Skow says. “The best bet for blizzard conditions across the northwest third or so of the state.” He says the snowstorm should -not- threaten any of tonight’s caucuses.

“This evening shouldn’t be too bad,” he says. “The snow will just be starting across southwest and central Iowa. The real heavy snow doesn’t look to move in until around or after midnight. The caucuses should have fairly minimal impacts due to the snow but those who are traveling out from the caucuses on Tuesday might have some difficulties.”

Skow says it will likely be a rough go for tomorrow’s morning commute. “Thankfully, this is pretty much the only storm in our seven-day forecast to impact us,” he says. “It’s a fairly big storm. It’s our first real chance of blizzard conditions this year so people should be paying attention and make alternate travel plans on Tuesday if they have to.”

Dry conditions will return to Iowa from Wednesday into the weekend with highs mostly in the 20s and 30s.