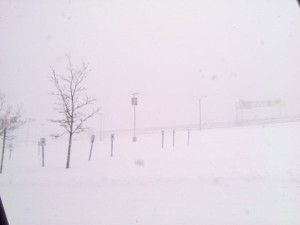 Cantore says the visibility will be near zero throughout the afternoon in western Iowa.

Cantore has spent much of his career broadcasting from the worst storms in the country — something he relishes doing.

“I do, I mean I like being out in the storm. When I was a kid I would always be out in the weather regardless of what season and what happened. There’s just something thrilling being out with all this energy going on,” Cantore says. “Thirty years later in my professional career, it just never gets old.” The Weather Channel team plans on being in Sioux City throughout the storm. 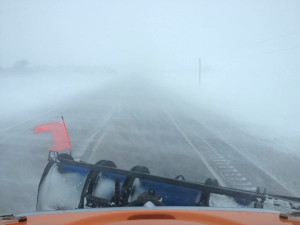 The Le Mars area has received more than one foot of snow so far today. Plymouth County Sheriff Mike Van Otterloo says they have been fortunate to have very few reports of stranded motorists.

He says people are staying home and those who are out are “using their heads,” but he says as the snow continues and the winds pick up, it will be tougher and tougher to get around.

The Iowa Department of Transportation and the South Dakota Department of Transportation have closed Interstate 29 heading northbound. All roads and highways in northwest Iowa are 100 percent snow covered, and travel is not advised. Plymouth County has pulled their snow plows off the roads until visibility improves, and the Iowa Highway Patrol has issued a tow band which means tow trucks are being advised not to pull any stranded vehicles until the weather improves. 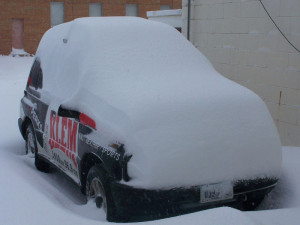 Le Mars Public Works Department superintendent Scott Kneip says it has been a battle to stay ahead of the falling snow.

He says the plow goes down one side of the street and comes back the other and it doesn’t look like they are doing anything. “But we are accomplishing getting off what is on the street.”

Kneip says many businesses, industries, and schools are closed for the day — which has helped the city street crews. “It does make our job a lot easier with less traffic out here,” Kneip says. 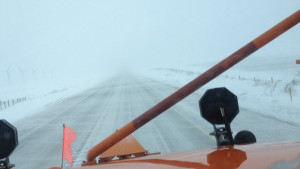 Hamilton County Engineer Dan Waid says they’ve had the same issues with the weather. “We were not able to see very far and the visibility was so poor, we had to pull the plows for I suppose an hour, hour-and-a-half, until we were able to see a little bit better,” Waid says. The winds are not the only problem, the wet snow is adding to the issues faced by plow operators.

“This type of snow is difficult to get underneath with the plows,” Waid says. “Even if you drive on the roads after the plows have gone through, you are still going to find that there is residual moisture there that is going to freeze, and could be slippery.” Waid said it’s best to just stay off the roads and highways due to the poor conditions. Webster City received more than six inches of snow since early this morning.