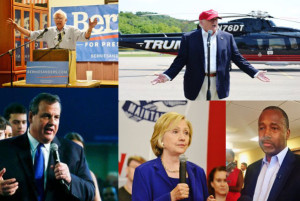 “Tonight is a victory for the grassroots,” Cruz said to launch his victory speech.

“To put in perspective your incredible victory that you have won tonight, that is the most votes every cast for a Republican primary winner (in Iowa),” Cruz told his supporters.

Cruz said Iowans refused to let the “Washington cartel” and the media to tell them how to vote.

“Tonight Iowa has proclaimed to the world: morning is coming,” Cruz said.

Donald Trump gave a very short but very upbeat speech to his supporters. “I have to start by saying I absolutely love the people of Iowa,” Trump said. “Unbelievable, unbelievable.”

Trump said “everybody” told him not to campaign in Iowa.

“And I said: ‘But I have friends in Iowa. I know a lot of people in Iowa. I think they’ll really like me. Let’s give it a shot.” They said: ‘Don’t do it.’ I said: “I have to do it,'” Trump said. “And we finished second and I want to tell you something: I’m just honored. I’m really honored.”

Trump even praised his competitors.

The Sanders campaign is calling the race a “dead heat” now.

Sanders has been calling for “transformation” of the country and he told his supporters last night Iowa that has begun the political revolution they seek.

“I think the people of Iowa have sent a very profound message to the political establishment, the economic establishment and, by the way, to the media establishment,” Sanders said, to cheers.

Former President Bill Clinton and their daughter, Chelsea, stood on stage as the former secretary of state spoke to supporters in Des Moines.

“Thank you all so much,” Clinton said. “Wow. What a nice, an unbelievable night. What a great campaign.”

In the days leading up to the Caucuses, Clinton has been telling Iowa audiences she’ll be a better president because of what she’s learned on the Iowa campaign trail and she kept to that theme during her remarks last night.

“This has been an incredible honor to campaign across Iowa with so many of you, to make the case for the kind of future we want for the Democratic Party and for the United States of America,” Clinton said.

Clinton hinted at a looming battle for her party’s presidential nomination. Polls show Sanders is leading in New Hampshire, which holds the nation’s first primary next week.

Iowa’s results have prompted two candidates to exit the race.

Democrat Martin O’Malley and Republican Mike Huckabee suspended their campaigns last night. Florida Senator Marco Rubio got a boost for his campaign with a strong third-place showing. Rubio promised to unify the party and unify the conservative movement.

“If I am our nominee and I will be our nominee thanks to what you have done for me in this great state,” Rubio said, to cheers at his Caucus night rally.

The chairman of the Iowa Republican Party says turn-out last night set an all-time record for the Caucuses. Democrats have not released turn-out stats yet.