You are here: Home / News / ‘Gentleman’s Guide to Love and Murder’ makes one stop in Iowa 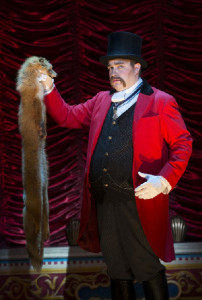 The musical comedy that won the 2014 Tony Award for Best Musical opens tonight in Des Moines, its only stop in Iowa on its first national tour.

One of the stars of the Broadway production of “A Gentleman’s Guide to Love and Murder” is John Rapson, who plays a total of eight roles on the stage, all members of the same family, men, women, young and old.

“It’s an eat-your-Wheaties-in-the-morning kind of role, that’s for sure,” Rapson says. “It’s such an extraordinary piece of writing and it’s the greatest challenge I’ve ever had. It’s so entertaining to do it every night and it’s really fun to watch the audience as we go through the show begin to catch on to the fact that it’s the same guy doing all of these parts.”

One of the biggest obstacles to playing all eight roles is the lightning-fast costume changes that are required. Rapson says, “You kind of go down as one character and then you pop back up as the next and the quickest one I have is 16 seconds long and none of them are all that much longer than that.”

The play is set in 1909 London and the main character learns he’s a distant heir to a vast fortune but he’s eight people in succession away from being able to claim it. All eight of those people are played by Rapson, who says he makes each character an individual.

“Everybody has a very distinctive voice which was one of the most interesting parts of rehearsal, trying to find out how each of these people talked,” Rapson says, “figuring out what your voice can do in terms of its range, high low, gruff, the opposite of gruff. It’s sort of a vocal workout every night.”

While on Broadway, the show received ten Tony nominations and won four. It also received a 2015 Grammy nomination for Best Musical Show Album. It runs through Sunday at the Des Moines Civic Center.