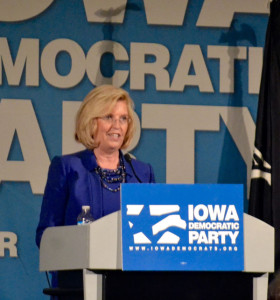 Iowa Democratic Party chair Andy McGuire late this afternoon said the results of her party’s caucuses “are final” and there will be no “recount” despite the photo-finish.

“I think we did a great job with the turnout we had and with the incredible closeness of the race and we reported the results and we stand by them,” she said during a Radio Iowa interview.

The results were reported just before noon today — nearly 17 hours after the Caucuses commenced Monday night. The Iowa Democratic Party announced Hillary Clinton won 3.77 more “delegate equivalents” on Caucus Night than Bernie Sanders. Clinton is calling it a victory. Sanders calls it a virtual tie. At one point today, the Sanders campaign suggested raw vote totals for each candidate should be released. McGuire said that will not happen.

“And the reason we don’t do that is this is a Caucus,” she told Radio Iowa. “This is not a straw poll.”

Some of the Democratic activists who attended the caucuses have contacted Radio Iowa to complain their precinct meetings were poorly run. One precinct in Des Moines failed to report its results on Caucus night and the reluctantly-elected chair of that precinct meeting handed in the results this morning.

“We always want to have the most well-organized caucuses we can, but when you’re dealing with volunteers and you’re dealing with overflow crowds, this actually a good thing for us,” McGuire said, “so I’ll take that — that there were more Democrats than we think were maybe going to come.”

McGuire rejected reports the party failed to recruit at least one person to serve as a temporary chair to start each precinct meeting.

“We have volunteers all over the state, 1681 of them that do their very best to have a wonderfully-run caucus,” McGuire said. “…We had 171,000-plus turnout which is a higher turnout than I think anyone expected.”

The campaign manager for Bernie Sanders has blasted the “arcane” rules by which the caucuses are run. For example, the Microsoft “app” designed to handle the results recorded seven “coin tosses” to determine which candidate would get a delegate.

“Six of them went to Bernie Sanders,” McGuire said this afternoon. “Five of those were between Hillary and Bernie Sanders. One of those was between Sanders and O’Malley and then there was one for Clinton, between Clinton and Sanders.”

The rules “haven’t changed,” according to McGuire.

“When there’s a tie, you’re going to have a game of chance and if there’s two people involved in a tie, typically we tell them in the rules — written down for everybody to see at all the trainings we did — that there’s a flip of the coin,” McGuire said. “Certainly that’s a very equitable way to do this.”

There may have been more “coin flips” at rural precincts where delegate counts were telephoned in rather than calculated and reported using the Microsoft app. All three presidential campaigns had representations in the “tabulation room” on Monday night and McGuire said any “grievances” raised then were addressed then. She has not personally talked to any representative of the Sanders campaign since then.

The results of the Republican Party’s caucuses in 2012 were razor thin as well, with the chairman of the Iowa GOP declaring Mitt Romney the winner on Caucus Night, then 10 days later releasing a “canvas” of precincts that indicated Rick Santorum won.