You are here: Home / News / Winter weather causing travel issues across the state

Blizzard conditions are causing all sorts of travel problems on the ground and in the air in Iowa today Travel is not recommended by the DOT in many areas and tow bans are in place.

“We have a big area of low pressure that moving threw the plains and the Midwest. And with temperatures cold enough, as well as well enough moisture, that is producing snow across Iowa,” Angle says. He says the storm is bringing in colder temperatures.

“We do expect temperatures to remain below freezing for much of the week,” Angle says. “And with strong winds we will see blowing and drifting of the snow continuing throughout the day, as well as tonight.” The National Weather Service predicts the strong winds in western and northern Iowa will increase throughout the day.

The winds have already caused problems in western Iowa, as American Airlines gate agent Troy Martin says their flights out of Sioux City were canceled. 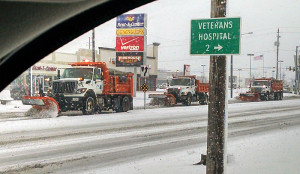 He says the flights tomorrow morning may be canceled too if the planes cannot get in from Chicago. He says the airline will be rebooking people and they can call and find out what flight they are on if they haven’t gotten a call from the airline.

There’s either a blizzard, winter or ice storm warning for most of Iowa. Parts of the state will get six-to-twelve inches of snow, as well as extremely hazardous travel conditions.