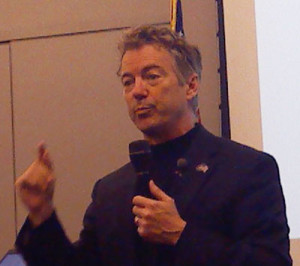 “Although today I will suspend my campaign for the presidency,” Paul said, “I will continue to fight on for liberty, for the constitution, for justice in the United States Senate.”

“Kelly and I are deeply grateful to our outstanding staff and tireless volunteers and supporters, people who believe in liberty,” Paul said in a video statement.

Senator Paul’s father, former Texas Congressman Ron Paul, ran for president three times and formed the “Campaign for Liberty” to elect like-minded conservatives. The congressman’s son had hoped to inherit all of those “liberty movement” activists, but there were defections to other candidates like Ted Cruz, Donald Trump and even Bernie Sanders.

“It has been a privilege to give voice to the liberty movement in this race and I believe we have broadened the debate by being part of it,” Paul said today.

Senator Paul got nearly 8500 votes on Monday night. That was four-and-a-half percent of the votes cast and put him in fifth place. In 2012, his father finished third in the 2012 Iowa Caucuses, with more than 21 percent of the vote.