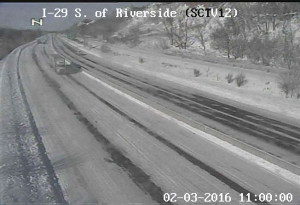 Road conditions across northwest Iowa are improving but travel is still not advised in many areas due to blowing and drifting snow from Tuesday’s blizzard.

Some areas got more than a foot of snow, which is finally tapering off this morning.

Iowa State Patrol Trooper John Farley says the Sioux City area — which got 15-inches — is still in bad shape, though Interstate 29 has reopened. 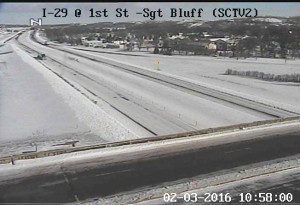 There are some vehicles in the ditches that have been stranded since the storm, but now that more roads are being cleared, he’s finding more stranded motorists.

“We are noticing quite a few more vehicles that went into the ditch or the median during the overnight hours,” Farley says. “Just since I’ve been out, for the last hour and a half, I’ve encountered maybe six or seven additional ones, from the ones we had last night.”

Trooper Vince Kurtz is been traveling in Sioux, Plymouth and O’Brien counties and says road conditions are not good. “If you’re looking at going out this morning, take a look at the Iowa 511 website before you go,” Kurtz says. “There are several road closures and a tow ban is still in place in much of northwest Iowa and a lot of the county roads are still completely impassible.”

Kurtz says to delay your travels, if possible, to allow snow plow crews the opportunity to clear the roads. He says there are still several vehicles stuck in the ditches and even abandoned — on — the roads. “If your listeners are having to travel this morning, just make sure you’re taking it slow,” Kurtz says. “If you don’t have to be out, the best thing is to wait. Our DOT and county snow plows are doing a nice job of getting us dug out.” Kurtz says the winds are not as strong as they were yesterday, but he cautions there are still times when motorists may encounter white-out conditions.