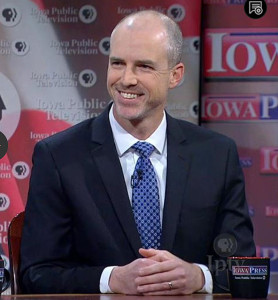 Brad Anderson says Democrats should consider having straw poll ballots, just like Republicans do at their Caucuses.

“The one thing that is troubling is in a close race there should be some kind of recount procedure and right now because of the way it’s done on the Democratic side, it’s just not possible,” Anderson says. “We don’t have ballots.”

Democrats decide the winner of their caucuses by counting the number of delegates each presidential candidate wins — and there are complex calculations for determining those “delegate equivalents”.

“We need to form a commission that takes a look at it in the same way that Republicans did in 2012,” Anderson says. “I think there are very fair questions, but I think at the end of the day this process is one that makes Iowa the center of attention and we have always handled the spotlight fairly well.”

The Iowa Republican Party tinkered with the rules for its caucuses after Mitt Romney was declared the winner on Caucus Night, Rick Santorum won a “canvas” of most precincts 10 days later and Ron Paul had the most delegates at the party’s national convention. Anderson, who backed Hillary Clinton in the Caucuses, says there are specific things that need to be addressed by Iowa Democrats, like the “logistical challenges” that were evident on Monday night.

“Certainly, some of these precincts have just gotten too big,” Anderson says.

For example, Anderson went to his precinct on Caucus Night, but the crowd was too big for the elementary school gymnasium — so people were sent outside to conduct the caucus in the school’s parking lot.

Craig Robinson, a Republican activist who once served as the political director for the Republican Party of Iowa, says the two parties should collaborate on technology, so — for example — people aren’t filling out paper voter registration forms on Caucus Night.

“I think the parties need to work together for the next four years, not just in the year of the caucus,” Robinson says. “…There needs to be some existing infrastructure built.”

Robinson attended his GOP precinct caucus in Ankeny, where 200 people were forced to fill out the paperwork to change their voter registration before the caucus could start. Robinson says the use of technology would help speed that process.

Robinson and Anderson made their comments today during taping of “Iowa Press” which airs tonight on Iowa Public Television.