You are here: Home / News / Legislators to get ‘silencer’ tutorials on Monday 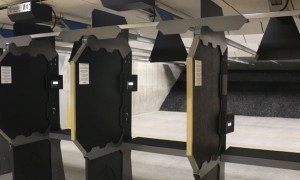 The “Sportsman’s Caucus” in the Iowa legislature is hosting a field trip to an indoor shooting range Monday.

Representative Scott Ourth, a Democrat from Ackworth, says the exercise is for legislators — not the public — and lawmakers will be able to use a device that’s actually illegal to own in Iowa.

“The purpose of this thing is since we, you know, encounter legislation and have debates regarding these devices and all that, we decided to put this on so that you can actually go and fire a firearm with suppressors,” Ourth says.

Under current Iowa law, suppressors or “silencers” as they’re sometimes called, are illegal to buy. In 2014 and again in 2015 legislators debated making the devices legal. The shooting range legislators will visit Monday does not sell suppressors, but it has a federal license that allows the use of suppressors within one of its 17 shooting lanes.

The facility, located in the Des Moines suburb of Johnston, was visited by a number of Republican presidential candidates who stopped by to do some target shooting over the past several months. On Monday, there will be a seminar on suppressors for state legislators.

“A classroom type, learning thing where they show how they’re built and what they look like and you can handle one and then you can see how they work,” Ourth says. “…I think it will probably help dispel some myths about the things.”

During a 2014 debate in the Iowa House about legalizing suppressors, critics said muffling the sound of a gun shot would give “a new degree of intimacy for mass shootings.” Supporters of the move say the “silencers” help preserve the hearing of gun owners who regularly take target practice. It is legal to sell or own a suppressor in 40 other states.