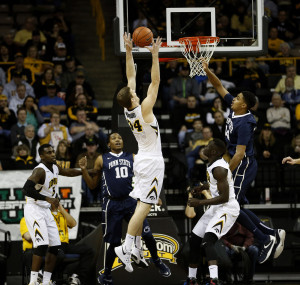 The fifth ranked Iowa Hawkeyes are alone at the top of the Big Ten standings. The Hawkeyes raced away to a 20-point second half lead and cruised to a 77-65 win at Illinois.

Peter Jok finished with 23 points and Adam Woodbury had 10 points and 14 rebounds. The senior center was five of six from the field and says the guards set him up.

” I rely on those guys to get me easy looks”, said Woodbury. “When they attack the hoop they are so talented and so aggressive that either the guy helps to take their shot away and they can dump it to me or they can go and score it themselves.”

Jarrod Uthoff also had a double-double with 18 points and 12 rebounds. Iowa outrebounded Illinois 43-32 and the Hawkeyes had a 26-6 edge in second chance points.

The Hawkeyes are 19-4 overall and will visit Indiana on Thursday night.