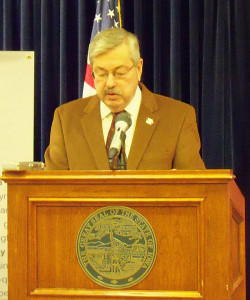 Governor Terry Branstad isn’t happy that Democrats in the Iowa Senate are pushing a bill that would stop the Republican Branstad’s plan to move the 560,000 Medicaid patients in Iowa into private managed care plans.

Former Governor Chet Culver, a Democrat, is holding two town meetings in eastern Iowa Tuesday to talk about the issue.

“Well I’m disappointed that Senate Democrats and former Governor Culver would make this a partisan political issue,” Branstad says. “I would point out that when the Lieutenant Governor and I were elected, Culver used over 440 million dollars of one-time money for Medicaid. The Medicaid program was in jeopardy because there were not ongoing funds being used to sustain it. We dug out of that big hole that he created.”

Branstad says Democrats are trying to torpedo a “thoughtful, systematic approach” to modernizing Medicaid. “I think it’s outrageous, political and that kind of partisanship should have no place in trying to deliver the best healthcare to the citizens of Iowa,” Branstad says. He says the privatization is something 39 other states have done and shown to be successful over the way things have been done.

“We feel an obligation to provide the best medical services to the people of Iowa, and to do it in a way that coordinates those services. We’ve seen the experiences of other states that have improved health. We’ve increase the number of people on Medicaid, but their health has not gotten better.” Branstad says.

(Note: this story was update to correct the time of the Culver events from Monday to Tuesday)