You are here: Home / News / Many counties under a blizzard warning 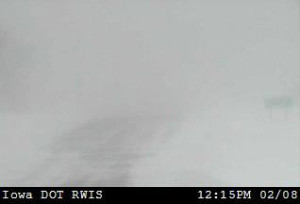 A Blizzard Warning is posted for more than 30 counties across Iowa’s northern half, while much of the rest of the state is under a Winter Weather Advisory.

While the term “blizzard” conjures thoughts of deep snow drifts for many Iowans, National Weather Service meteorologist Brad Small says that won’t be the case today.

“People think of blizzards, probably the common definition is associated with a lot of snow,” Small says, “but technically, all it means is that you can’t see where you’re going because of strong winds and low visibilities.” To be a blizzard, winds need to be howling at 35-miles an hour or greater and visibilities need to be at a quarter-mile or less due to blowing snow. Small says new snowfall today will be minimal.

“It’s really difficult to measure,” Small says. “Probably an inch is a very common snow amount so far, of what we’ve seen. The snow amounts are not going to be the problem with this storm. It’s definitely going to be the visibilities, especially in rural and open areas.” Another hazard in this latest weather event is the bitter cold.

A frosty week is ahead. The forecast calls for low temperatures to remain mostly in the single digits and teens through the weekend, with highs only in the teens and 20s. See more at weather.gov.