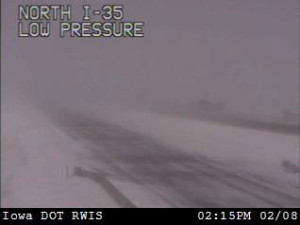 With falling snow and whipping winds, many Iowans who are venturing out are experiencing white-out conditions on the roads today. Those who get stuck may find themselves out of luck as many counties have issued tow bans during this blizzard.

“I have a four-wheel drive and if I wouldn’t have had it, I’d have been stuck in a drift,” Hagenson says. “The plows have pulled off the roads. We’re not recommending any travel because there’s no place for you to go. You might get a break but then there’s white-outs and more chances for accidents.” The sheriff says they’ve had multiple reports of accidents and vehicles in ditches and he says if you can stay home, you should.

“There’s no towing of vehicles,” Hagenson says. “If you get stuck and you can’t get away from it or get out, you’re going to be staying with your vehicle because there’s no wreckers going out to pull people out either.” Some Iowa roads are closed either by blizzard conditions or by accidents. 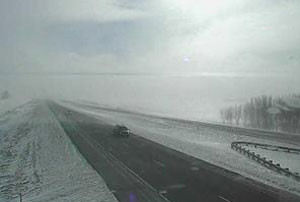 Ellen Wheeler works at the Boondocks truck stop on Interstate 35 near Williams in Hamilton County. She says many people have pulled off the road and are camping out there. “We’re going to try and keep everybody nice and safe and off the roads here,” Wheeler says, “and that’s throughout the day.” She expects the place to be filled with stranded motorists and truck drivers.

A similar scenario is being played out at the nearby Flying J truck stop. The Blizzard Warning continues for many counties until 6 P.M.